The REAP (Rural Economic Area Partnership) Investment Board announced the release of an Impact Study that highlights major activities and accomplishments of the two North Dakota REAP Zones from 1999-2006.

The report also reflects REAP Zones’ taxable sales and purchases have increased 10.7% annually over the past 3 years, higher than the 9.3% for all N.D. rural counties and 8.9% for the entire State. In addition, the REAP Zones have narrowed the gap on net migration during the last five years “The North Dakota REAP Zones have proven to be a valuable revitalization tool for our rural communities” states Curt Jacobson, Chairman of the REAP Investment Board.

Jim Belquist, REAP Executive Director stated, “The success of the REAP Zone activities can be attributed to many factors: earmarked funding from Senator Byron L. Dorgan; excellent support from the USDA-Rural Development North Dakota staff; the Zones’ partnerships with the regional councils; and the organization of the volunteer boards, which meet monthly to plan zone strategies, allocate resources and evaluate on-going projects. The North Dakota REAP Zones are organized to work individually and jointly on regional rural issues, an insightful approach to rural North Dakota challenges.” 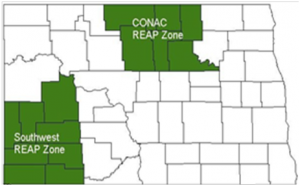